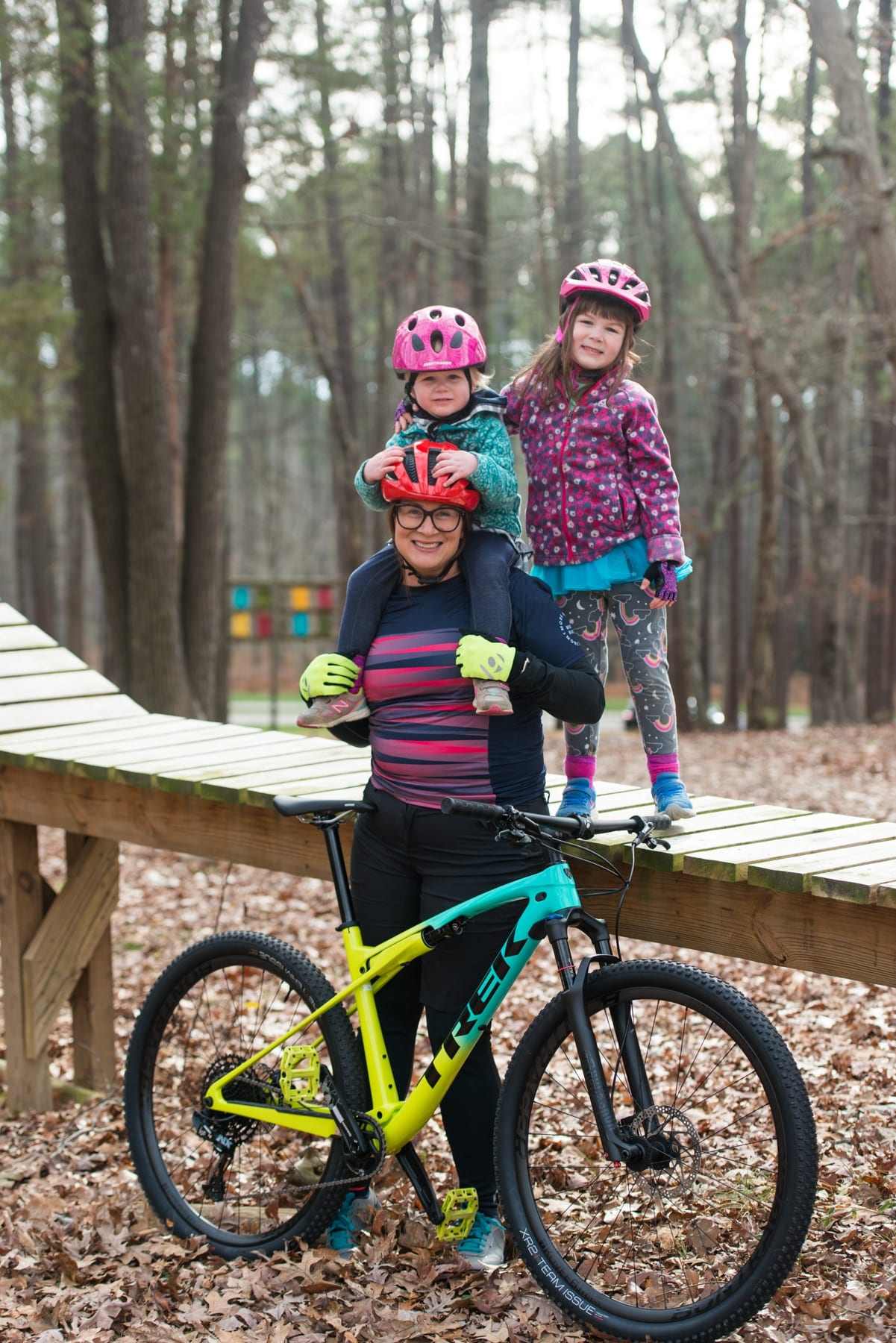 Jerel Wilson sees cycling as a perfect way to spend time with her daughters, Sydney, 3, and Anna, 5.

On a recent afternoon at a wooded trail in Briar Chapel, Jerel Wilson’s doing what she loves most: coaching a hesitant girl over a tricky spot on a mountain bike course.

“Come on,” Jerel says, encouraging the girl with a bright pink helmet and lime green push bike, who paused on top of a ramp made of jumbled stones. “You can do it, just like the smaller ones! Let it go!”

Jerel regularly leads women-only mountain bike rides in the neighborhood and other local trail systems, drawing riders that include teenagers, moms and one recent participant in her 70s. The rides are part of her job as a women’s advocate for Trek Bicycle, a major bike manufacturer, and Trek Bicycle in Chapel Hill. She is also a senior training manager for a national high school mountain bike racing association, a job that occasionally finds her setting up “mountain” trails in notably ridge-free places like Nebraska and Illinois.

But it’s working with girls and women one-on-one that Jerel enjoys best, although her recent student at Briar Chapel, Sydney, 3, wasn’t listening as well as most.

“Sometimes she rides her Strider to the top of the jump to see what it looks like up there,” Jerel says of her youngest daughter. “Usually they just park and walk around.”

On this day, Sydney was feeling brave, easing the bike down the rocks before picking up her feet and swooping back to the trail, matching the moves of her older sister, Anna, 5. 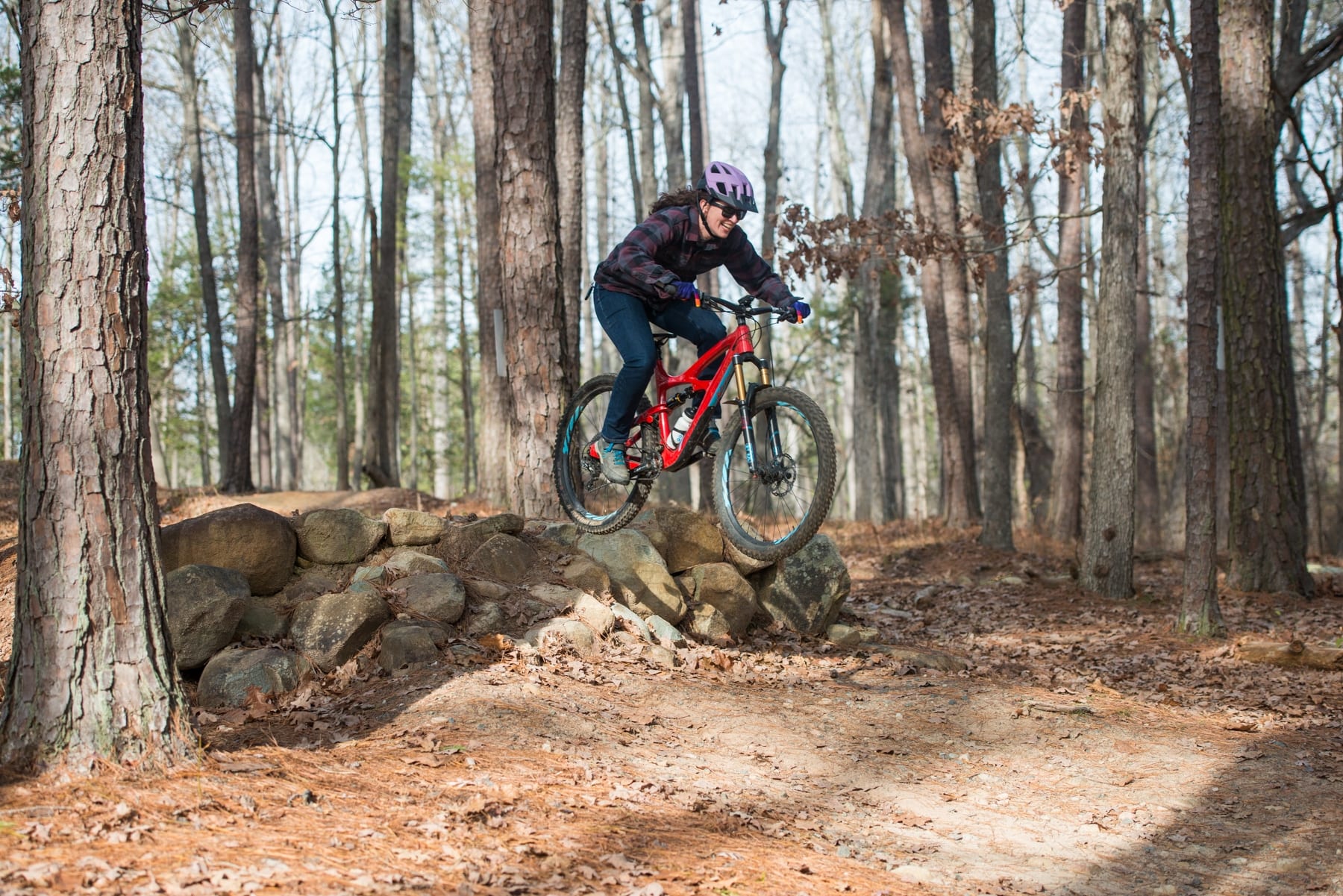 An athlete growing up, Jerel was in her 20s and living in Chicago when she found cycling after a series of running-related injuries. She got deep into the local road cycling community, joining racing teams and traveling for events. When she and her husband, Ryan, a video game engineer, moved to North Carolina in the early 2010s, she again dove into road racing, but switched to mountain biking after a collision with a car.

“You might crash into a tree [when you’re] mountain biking, but you’re not going to get run over by a car,” she says with a light laugh. “I really found that I can just totally turn my day off because I’m really focusing on, you know, not crashing into a tree. I can go out for a ride at lunchtime and not think about work and not think about anything and just be in nature and clear my mind. It’s a great way to reset.”

Jerel now holds what she calls “Try It Out” rides in Briar Chapel and on the American Tobacco Trail. She coordinates both through the Triangle Off-Road Cyclist’s website and the social media groups “Chapel Hill Cycling for Women” on both Facebook and Strava, a mapping website and app that tracks cycling and running exercises. Members post GPS logs of their rides and arrange to meet up for more.

“Women in cycling are smart, and they’re passionate, and they were people I wanted to be around,” Jerel says. In road biking, she says, she often felt friction with men’s riding groups, but has found nothing but support in mountain biking.

Jerel also works with the National Interscholastic Cycling Association, or NICA, which has launched mountain bike racing leagues in dozens of states. Several local kids, she says, participate on teams based in Chapel Hill (and often practice at Briar Chapel). She was hooked, she says, after attending one race.

“I’m a social worker by trade, and I just saw these middle schoolers and high schoolers wanting to be with their families, with their parents, out in the woods,” Jerel says. “I saw kids not sitting around on their phones and their screens and just being outside and being kids. And that’s what I want for my community.

“You can ride bikes together [as a family] forever,” she says. “And so, my family rides.”