As a fifth grader in 2019, Cattia Blake, 11, wrote a piece for Horton Middle School’s annual poetry contest. She called it “Invisible.”

“The poem’s kind of about finding who you are and trying to fit in,” says Cattia, now a sixth grader who is on the school’s cheerleading squad and battle of the books team. She also writes poems on her own. “Some of my emotions kind of just, like, spill out onto a paper.”

Ashlynn Poston, 12, who sings in the chorus and plays softball, wrote a poem called “Equal.”

“It was about how we all need to be treated fairly,” she says.

The girls’ poems were two of four winners in the contest, which is held each year as part of Horton’s school wide celebration of its namesake, George Moses Horton. Born a slave in 1798, his owner relocated his tobacco farm to Chatham County when George was a toddler.

As an adult, George composed four books of poetry, and modern scholars often list his works alongside that of slave authors like Jupiter Hammon and Phillis Wheatley as defining examples of slavery-era African American literature.

While preserving symbols of local heritage is cited by many as a sacred public duty, the county has few public memorials to Horton’s legacy other than the Pittsboro school’s name. Principal Valencia Toomer says George Moses Horton Day allows kids to build a unique sense of connection and school pride.

“We have door-decorating contests [pictured below], we do other activities and the poetry contest,” Valencia says. “It gives students an opportunity to understand the history behind the name.”

Cattia says the historical focus makes attending the school feel special. “Horton has its own story,” she says. “It’s not just a school that just popped up out of nowhere.”

George grew up as a slave on a farm between today’s Fearrington Village and Bynum. Other slave authors, like Wheatley, Hammon and Frederick Douglass, either lived in the north or received at least rudimentary early educations. George, on the other hand, taught himself to read at 15 using old spelling books, hymnals and the Bible, and composed nearly all his poems as he worked in the fields. According to “The Black Bard of North Carolina,” a collection of work by and about George edited by Joan R. Sherman, George found his audience on Sundays when he would walk eight miles to markets in Chapel Hill to sell produce from the Horton farm. He sold poems to market goers, and young men studying at UNC commissioned him for acrostics – poems in which the first letter of each line would spell the name of their girlfriends (whom George called “tip-top belles”). One customer is said to have been future President James Polk. Another said George’s 50 cent poems were “generously gushing” while his 25 cent versions were more “lukewarm in passion.”

George composed poems orally until he learned to write in his 30s. With the help of people he met in Chapel Hill, he eventually published four books, which reached national audiences. Gaining his freedom in 1865, George moved to  Philadelphia after the Civil War, where he is believed to have died in 1883. 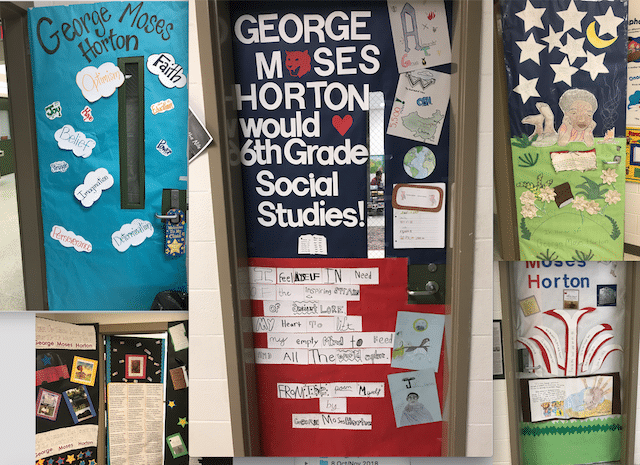 For George Moses Horton Day, Pittsboro students study George’s life and then write poems on any subject they feel inspired to tackle. Along with Cattia and Ashlynn, eighth grader Amanda Zrubeck, 13, and sixth grader Yareni Delgadillo Delgado, 11, participated last year. Yareni wrote a Kwansaba – a seven-words-per-line style rooted in African poetry – on Horton’s life, while Amanda took on a modern flashpoint topic in a verse that tackled school shooters. The poem is not about acts of violence, but the mental toll of bullying, a topic that was on her mind as she learned about George.

“I often think about heavier topics because I want to change the world one day,” Amanda says.“If you’re bullying someone, if you’re actively talking about mean things, actively beating them up or whatever you do, it’s discriminating.”

Horton is one of just two remaining secondary schools in Chatham that was once a black high school under segregation. In 1962, more than 1,300 students attended, three times the current enrollment, and it remains one of the county’s most diverse schools.

“Our school has a purpose and a meaning to it,” Amanda says. CM

The author of ‘Poet: The Remarkable Story of George Moses Horton’ says the historic figure offers lessons for today

After learning the story of George Moses Horton more than a decade ago, children’s book author and illustrator Don Tate published “Poet: The Remarkable Story of George Moses Horton,” a picture book story of Horton’s life, in 2015. Also the author of ”It Jes’ Happened: When Bill Traylor Started To Draw” and the illustrator of several other children’s books, Don blogs about African American authors at thebrownbookshelf.com from his home in Austin, Texas.

What was the seed of the book, and was the idea always to be a kids’ book?

A writing buddy, author Chris Barton, sent me an article about a dorm at UNC [that was going] to be named for an enslaved poet. [The George Moses Horton residence hall was dedicated in 2007]. I found Horton’s story compelling, especially after learning how much he wanted to learn how to read as a child. So often, kids today complain about reading and books, preferring video games and Netflix. Even my own son, at that time, complained about having to read. 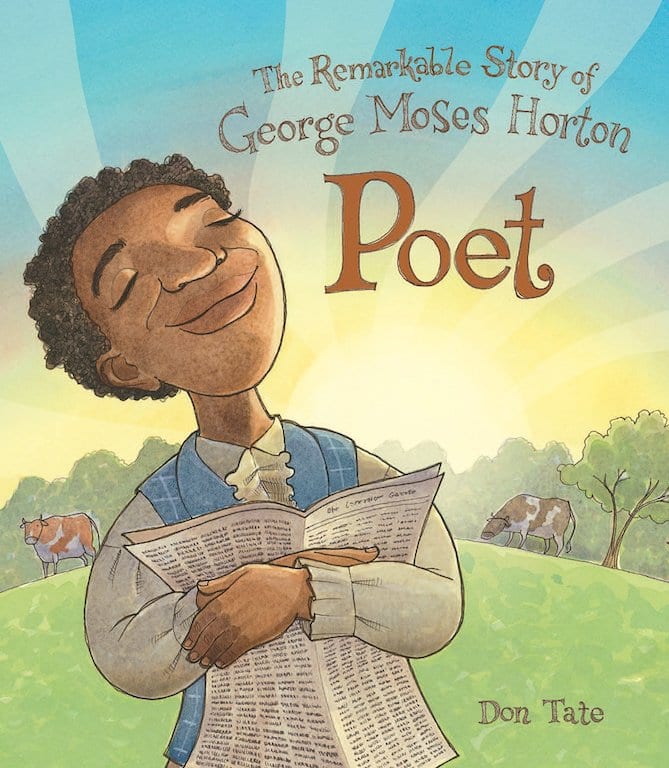 How do you temper the facts of slavery and the early African American experience when children are the audience?

While I used a more naive or stylized form of art to soften the tone, I was straightforward in telling the truths about the history of slavery in this country. I don’t believe in sugarcoating history, not even with children. They need to know what happened back then in order to better understand their world today. Picture books can help to put current events into historical context.

There is a scene toward the end of the book where black people are rebelling against the people who enslaved them. I was very intentional about including that scene. I wanted to communicate that while black people were oppressed, they also fought back. Horton fought back through the poetry he wrote. Others fought back however they could. It’s an empowering message for young readers, demonstrating that they, too, have a voice when facing injustice.

How did you study Horton?

My primary source was his poetry collection, “The Poetical Works of George M. Horton, the Colored Bard of North Carolina.” He writes about selling acrostics (poems in which the first letters of each line spell a word) that he composed “at the handle of the plough” for college students and other people all over the state. Some prominent people commissioned his work. Many of these are on display at UNC, and thankfully some are online.

Have you been to Horton Middle School?

I did visit Horton a couple of times, which was a wonderful experience. I’d hoped to visit more schools [in Chatham], to introduce young readers to their hometown hero. I also spoke at a community event celebrating George Moses Horton. Many of Horton’s descendants were there, and it was such an honor to sign books for them.