The View From The Upside Down

As one of the top high school recruits in the nation at his peculiar position, Northwood High School’s Jake Mann has a different perspective.

Jake Mann is one of the best long snappers in the country.

He can fire a football between his legs with almost perfect accuracy, but here’s a bigger challenge: Can he teach me to do it?

Near the entrance of Northwood High School’s sports complex, 16-year-old Jake Mann leans against a brick building, facing the school’s football field. Jake is one of the country’s best high school long snappers, the specialized position that hikes the ball as far as 15 yards backward on kicking plays. Long snapping is both vital to a team’s success but also one of the least-celebrated skills in football, perhaps because, unlike blocking or tackling or slinging passes 50 yards, it doesn’t require brute strength and toughness but rather a mix of deft touch, flexibility and accuracy.

And on this Monday in October, Jake’s agreed to try to teach me how to do it.

Jake’s dad, Chris, says his son has been long snapping since he was 5. But Jake says he didn’t fully commit to the position until his freshman year. Now he’s the No. 1 long snapper in the class of 2022, according to Kohl’s Professional Football Camps, which specializes in the football positions of kicker, punter and long snapper. Jake has taken recruiting trips to schools like Virginia Tech and the University of Louisville. He’s even been on the sideline at Auburn University.

“My dad long snapped in high school,” Jake says, “and then he went to college to play safety, and he also long snapped a little bit as well, so I guess I always had it in my blood. It was natural, but then I kept going to camps, kept getting better and practiced.” 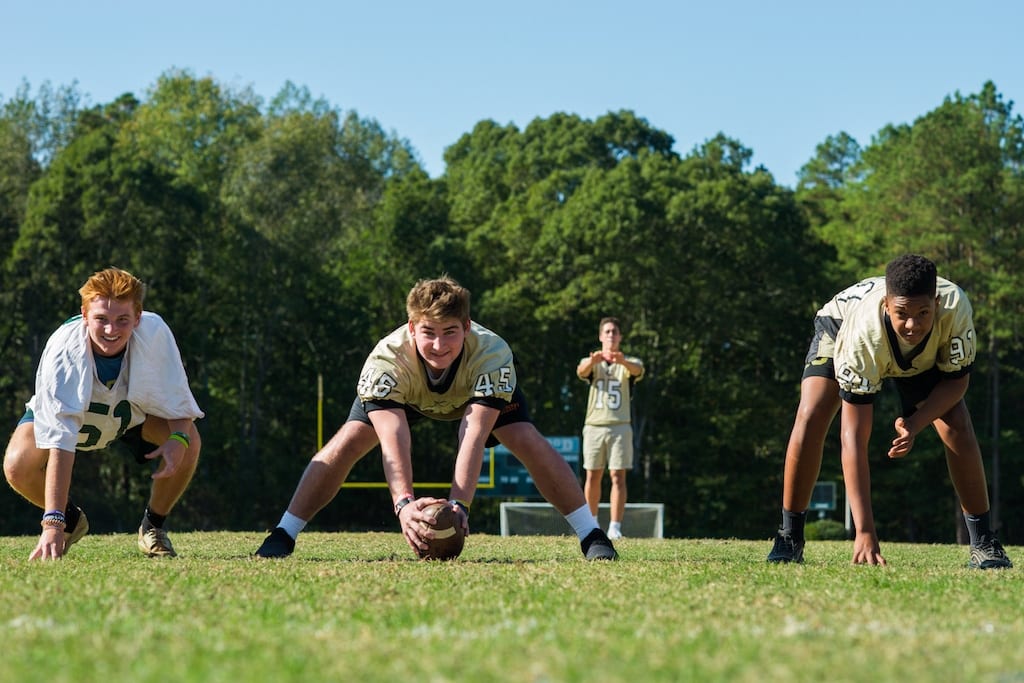 Even in high school, he didn’t set out to be a long snapper. As a freshman, Jake had dreams of being the kicker, but the varsity long snapper had an injury. Jake filled the position in the fourth game of that season and has long snapped ever since.

Jake and I talked about all of this as we watched students flood out of the high school doors to their after-school practices. Then we got down to business. We walked past members of the boys basketball team, which was warming up on the black synthetic track surrounding the football field. I can’t imagine what was running through their heads as Beth Mann, our photographer, and I followed Jake to the center of the football field. Maybe something along the lines of, “This poor woman. Does she even know how to catch a ball?”

No. … No, I actually don’t. I shrug it off even as my inner voice tells me not to make a fool of myself. 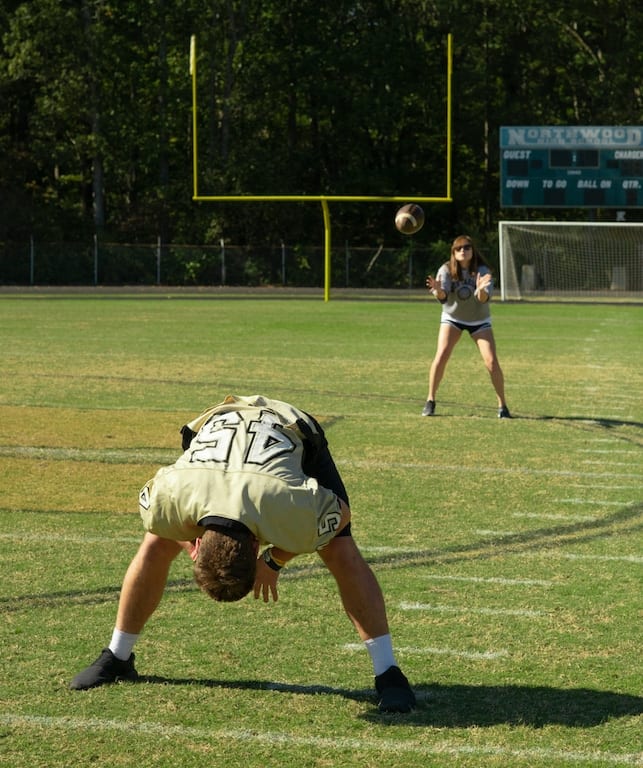 I caught a couple of Jake’s perfect throws before I tried a few unperfected ones of my own.

Jake stands 15 yards away, squats down, peeks between his legs back at me and then at the football in front of him. (Me: “I’m a runner. I played soccer. I’m ‘athletic.’ How hard can this be?” Also me: Terrified to catch the ball incorrectly and injure a finger.)

He looks at the ball balanced on the ground between his hands and flicks his wrists. The ball spirals quickly into my own outstretched hands. I yell in excitement, “I caught it!” – as if that’s an impressive feat, even though I couldn’t even see the ball before Jake threw it and then it suddenly appeared in my hands like some kind of magic trick.

Now, it was my turn to do the snapping. Jake stands just 10 yards behind me – not the standard 15 yards, but probably appropriate for catching a ball thrown by me.

Jake tells me to get in a squat-like position with feet parallel at shoulder-width distance. I’m supposed to extend both arms directly out. He places my hands on the football: dominant hand on the laces, opposite hand on the middle of the ball. Then there’s the last part, which requires flicking the wrists to aim at the target. It’s all hands and arms now. Jake says most people look between their legs, but he usually looks straight ahead.

I squat down and place the ball on the ground. It feels lighter than I expected. Before I can think twice, I flick the ball between my legs toward Jake. Before it even reaches his hands, I jump up and twirl around to see if I did it.

He’s holding the ball and smiling. I did it.

I do a few more successful and unsuccessful rounds, learning the importance of consistency.

It was easier to learn than I thought it would be. I didn’t throw with a spiral – the most difficult part – but at least I can throw a ball. For now, that’s good enough. CM