Tony Sabbagh grew up in Mooresville, north of Charlotte, wakeboarding and waterskiing on Lake Norman and riding skateboards whenever he could with his friends.

By 2003, he’d moved to Chatham as his work as a sales rep for a forklift company took off, moving into a house off Hamlets Chapel Road. He decided he wanted to build something both permanent and, well, just kind
of awesome.

Piece by piece, Tony and some committed friends built a series of 7-foot-tall skate ramps, eventually connecting them into a massive 22-foot by-50-foot bowl, bigger than a typical backyard swimming pool.

“[Public] skate parks are fun,” Tony says with a smile. “But in backyards, you can hang out with friends, drink beers and don’t have to worry about other people getting in the way.”

The ramp was a magnet for friends from around the area and even the greater Southeast until 2013, when Tony and his wife, Kim, moved to Bear Creek. The couple built a home on property just north of the Lee County line, and Tony rebuilt the ramp in 2016. He says he now skates at least twice a week. Starting on the lip of the bowl, he drops in and, pumping his legs, shoots up and down the sides, carving turns until he leaps back out over an edge.

“After a day at work, it feels good to come out here and get my grind on,” he says.

He’s often joined by his kids, Simon, 12, Anellise, 9, and Atticus, 5. As they’ve learned to do jumps and tricks, Tony says, he’s dialed his own back.

“I can do small aerials,” he says. “When you get older, you only want to do so much.”

Though his backyard bowl is on his own property, Tony thinks Pittsboro is overdue for a skate park, citing the success of publicly built parks in Apex, Chapel Hill, Durham, Raleigh and many towns in the Outer Banks, most of which were built under a state law that absolves cities and towns from liability on public skate parks if warning signs are properly posted. “Whenever I go to the park in Apex, it’s packed,” he says. “And skaters travel. We used to have people from Greensboro, South Carolina [and] Virginia. If people came to Pittsboro to skate, they would all eat and stop in local businesses.”

A local park is not a new idea. A decade ago, Tony formed a nonprofit aimed at building a skate park in Pittsboro, raising and spending more than $8,000 for detailed plans and initial surveys on land behind the Chatham County Sheriff’s Office. That effort fizzled, but Tony says he hopes to reboot the effort in 2020, betting that the influx of families in and around Pittsboro in developments like Briar Chapel and, soon, Chatham Park, will support the effort.

“Skating is the fountain of youth,” Tony says. “It keeps you young. As long as your body can do it, you can skate forever.” 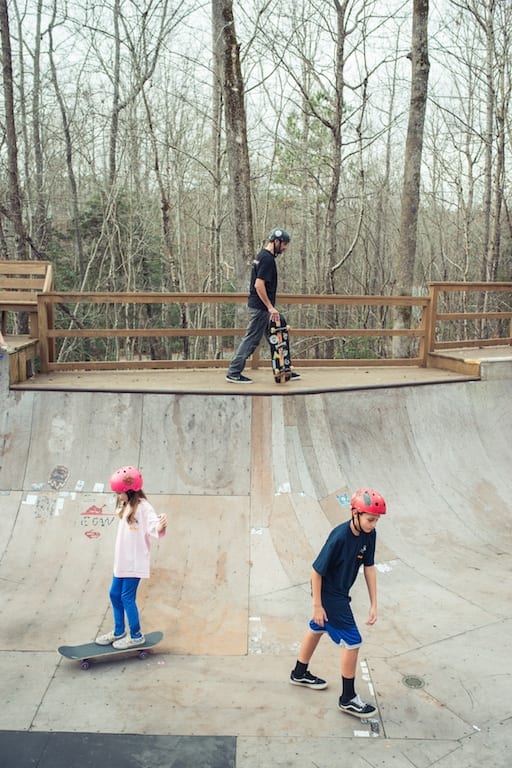