Pittsboro playwright’s latest is a ‘North Carolina fable’ of inequality

If you saw “Leaving Eden” on the PlayMakers Repertory Company stage in April, the play’s setting in a small North Carolina town might have seemed familiar. That’s because its author, Pittsboro resident Mike Wiley, based the play on Chatham. The first commissioned original work produced by PlayMakers, “Leaving Eden” uses Chatham as a canvas to explore racial divides that have long haunted the rural South. Mike calls the play “a North Carolina fable” that draws inspiration from stories told by Siler City residents, but creates an entirely new world.

“Leaving Eden” explores the cycles of history in a fictional town, Marah, by jumping between two time periods: the 1930s, when cotton is king, and 2016, as pork processing keeps the town alive. Then and now, black and Latino citizens are the town’s economic backbone, but remain vulnerable to violence and hatred.

Mike said PlayMakers originally approached him and composer/lyricist Laurelyn Dossett about writing a piece that focused on the death of mill towns in our state and the resulting economic devastation. As a documentarian trained to record modern life, Mike was intrigued by the idea of producing a work rooted in history. “I certainly saw a need to write that and also saw the possibilities in it,” he says.

Other responsibilities delayed creating the play until a new artistic director, Vivienne Benesch, brought it up to Mike again. “When Vivienne came in, she said, ‘OK, let’s hop back on this thing. We don’t want to drop it, we’ve got a grant, and the idea is still pertinent.’ And I said, ‘Well, let me go back to the drawing board and see what I can conceive.’”

Read more about the inspiration for “Leaving Eden” on page 88 of the August/September issue below.

“Leaving Eden” isn’t Mike’s first foray into dramatizing race relations. Among his work is “Blood Done Sign My Name,” which explores the 1970 murder of a black man in Oxford, 30 minutes north of Durham. Originally designed as a one-man play, a full-cast adaptation of the piece premiered at Raleigh Little Theatre the same month “Leaving Eden” ran in Chapel Hill. 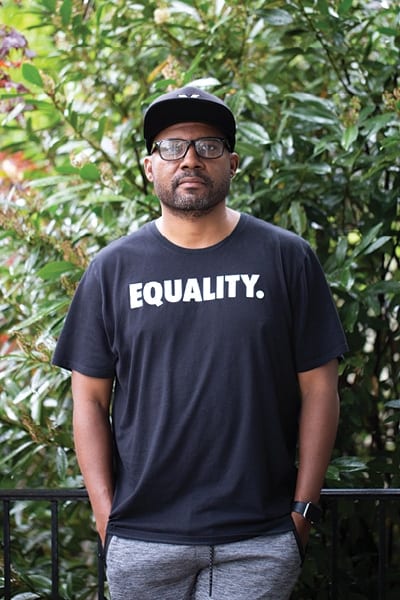 Another work, “The Parchman Hour,” celebrates the bravery and determination of the Freedom Riders whose 1961 bus tour brought attention to Southern segregation. Mike has also created two films – “Wolf Call” and “Dar He: The Lynching of Emmett Till” – based on the story of Emmett, a 14-year-old African-American boy who was murdered in 1955 when a white woman said she was offended by him in her family’s grocery store, a story she recanted later in life.

Mike’s pieces have been performed across the country as well as internationally, including in Canada and South Africa. He has a master’s from UNC’s Department of Dramatic Art, and was the 2010 and 2014 Lehman Brady Visiting Joint Chair Professor in Documentary Studies and American Studies at UNC and Duke University. UNC recently recognized Mike with a Distinguished Alumnus Award, given to alumni who have made outstanding contributions
to humanity.

But closer to home, Mike is probably best known for his outreach within local schools. Along with teaching art in classrooms around Chatham, he has performed his one-man play, “Jackie Robinson: A Game Apart,” which tells the story of the first black Major League baseball player. While some students know of Jackie, many are unaware of his groundbreaking career and his impact on America both in and out of sports. Mike performs in costume as the Hall of Famer and pulls students and teachers from the audience to participate.

While it’s a lot of fun for students, his performances and workshops also carry messages about social justice and culture. It’s a goal he has for all his plays. “What I hope people take away from the experience is that change is in their hands,” he says about “Leaving Eden.” “Whether that’s through brotherhood or the ballot box, change is within them, within their hearts, as well as within
their actions.”  CM

Read the original article from the August/September 2018 Issue: