The running club at House of Hops is a chance to get fit, recharge and finish with friends and a beer

Kate DiCato is not one of those running parents you see happily pushing a stroller ahead of her as she strides along. Not that she hasn’t brought her 2-year-old daughter, Lucy, along to her weekly running club atHouse of Hops a few times. “It’s less enjoyable,” Kate says. “It’s a hilly course, and you’re going uphill with the kid and then downhill with the kid. Ugh.” Still, Lucy is a major reason why Kate is now devoted to the weekly group that meets each Tuesday at 6 p.m. at the beer shop. Soon after Lucy was born, she and her husband, Tom, decided to set aside space in their schedules to spend time away from parenting responsibilities. Both work full time, Tom for Seattle Technology Group in Pittsboro, and Kate as a housing administrator at UNC. “Tom said, ‘You have to do something you do just for you, that you can call your own,’” Kate says. “I said, ‘I think I’m going to go do this run club.’” Kate took up running 10 years ago, she says, but was mostly a solo runner over the years, signing up for races and then squeezing in runs whenever she could train for them, including during lunch at work. She still runs at lunchtime, but after Lucy arrived, Kate knew she would have far fewer spare hours available to squeeze in a jog. And when it comes to family duties, Kate says, both she and Tom wanted to avoid getting into a habit of defaulting most parenting responsibilities to Kate.

“You need to make sure you’re not falling into the trap of always being ‘the one,’” Kate says. “You have to find some time to go away.” Kate showed up for the second meeting of the club in November 2018 and returned for more than 20 straight weeks. In all, she figures she’s been to roughly 35 sessions in the club’s first year. The club was originally modeled after running clubs at other House of Hops locations in the region. Pittsboro runner and House of Hops patron David Wood does most of the organizing, though he insists the concept – a low-pressure run with friends and then a tall cold one – sells itself. “Most people do the run to get to the beer,” he jokes. Kate says the club, which draws a half-dozen runners on a typical Tuesday, is the first open running club she’s found in Chatham that was not high pressure, but also didn’t fizzle out with low membership. 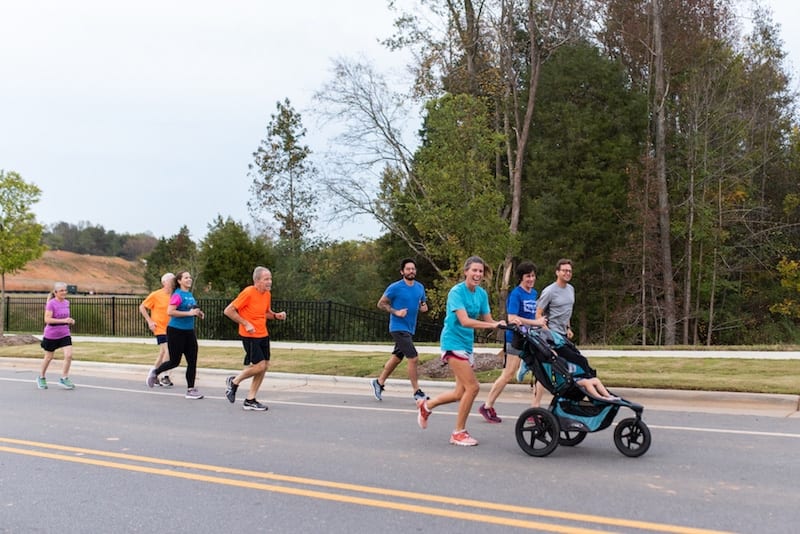 “There have been factions and different running clubs in Pittsboro, but it’s always kind of disbanded,” she says. This club, Kate says, is “a group of people expecting me to show up, not for accountability, but because we enjoy one another. We chat as we run, like, ‘How was that thing at work?’ So you do have the personal wellness piece but also the group of friends. We’ve run in ice storms and when it’s 100 degrees. As we’re running in the summer, we’ll all complain about the heat; in the winter, we’ll gripe it’s so dark.” A final unique draw is the location at the entrance to Chatham Park. Members meet in the parking lot of Penguin Place on Russet Run and take routes on Chatham Park’s new roads, which are paved but not yet developed. Though the group encourages and welcomes all levels of running, including beginners, Kate says she’s improved drastically with the group, dropping from a typical 10:30-minute mile to an 8:30-minute pace. Last spring, she hit a personal goal to complete the Tar Heel 10 Miler race in fewer than 90 minutes. “As one of the guys in the group says, ‘If you want to run faster, you have to run fast.’”

Tobacco Road Marathon and Half- Marathon – March 15 – On American Tobacco Trail, with segments in Chatham.

Jordan Lake 12-Hour Challenge – April 18 – Sponsored by Chatham County Partnership for Children, individuals and teams compete for total laps they can run on a 1.35-mile loop near Jordan Lake in 12 or six hours.

Miles of Hope 5K and Ride – April 25 – Benefiting the Cystic Fibrosis Foundation, includes a 5K run and biking options ranging from 22 miles to more than 60.

Into the Woods 5K– typically in November – 5K race at Woods Charter School.